18 March 2013 at Service4Service Blog in Mercedes 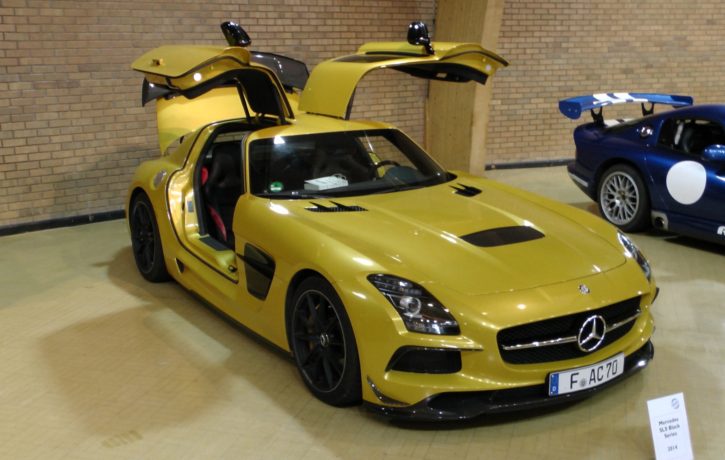 Back in 2006 Mercedes-Benz introduced us to the SLK55 AMG. A luxury sports car that was the first to be produced by AMG at Mercedes. Since then, there have been five new releases to the Black Series, with the latest being this, the Mercedes SLS AMG.

The SLS AMG Black Series has gotten narrower, gained some power and even been re-fitted with more upgrades and aerodynamic parts from front to back. If you liked the way it looked before, you’ll probably be an even bigger fan of this new one. Check out this video in which Jeremy Clarkson gives his opinion on the cars impressive stats, and deems it “the thinking mans supercar”.

There are a few decent videos of this car floating around online and from what we hear the revs sound like thunder. The Mercedes AMG SLS Black Series cars of the past all typically scream “look at me” so its no wonder that this new release is the latest beast of a vehicle produced over at Mercedes. AMG has stated that the new design has been inspired by the SLS GT3, a racing version of the SLS AMG coupe, except with wider arches, darker lights with black surrounds, new side skirts and front bumper with a carbon splitter.

Some other impressive specifications:

If you’re thinking of buying one, this stunning Mercedes SLS (Sport Light Super) will set you back about £230,000, making it only fractionally cheaper than a Ferrari F12.

The engine, handling and design have all been rated as excellent at carmagazine.co.uk, however, due to the cost, they feel that the car would be very hard to sell to anyone other than a die-hard AMG fan, or as a track day racing special vehicle. The new SLS AMG coupe is far more attainable to the masses and at a slightly better cost of £169,000.

Service4Service provide a quality Mercedes service or repair, maintaining your vehicles optimal performance, safety and comfort, at a much lower price than found with any of the main dealers locally in your area.